in my world of sleep deprivation and boogers on the wall, {don’t ask. it’s the kid. i find them everywhere. i’d actually prefer he eat his boogers than put them on the wall as he does. everywhere. even at my mom’s house. so so so so so nasty.}, it’s a miracle i even knew it was sunday, let’s just be honest.

upon my realization of the “holiday” (really?) and the fact that the girls are quite irish (though not catholic we still like to play along.) i simultaneously realized that the little one was going to be purple from all the pinching.

thus, i turned on disney channel and went to work making the cutest flippin’ outfit for her and repurposing the babies onesie. 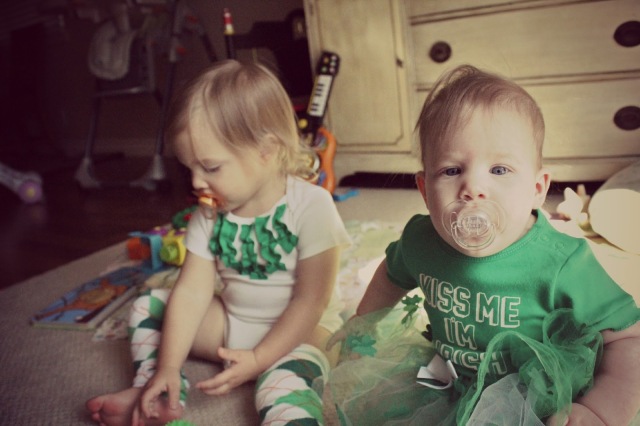 i loved it. the baby’s onesie was a long sleeve and since california is clearly having a hot flash it wasn’t going to work. i bravely cut off her sleeve and added the short sleeve cuff. then i took one of her sleeves, cut them into strips, did a baste stitch and sewed them onto a onesie. for her leggings i used a $5 pair of women’s knee high socks and made a pair of baby legs. 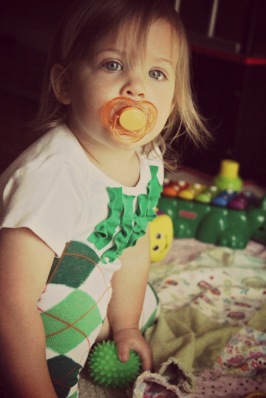 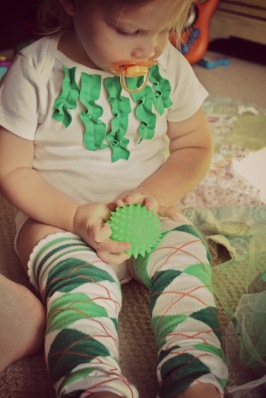 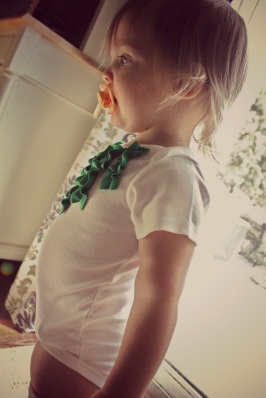 did i mention i love them. the outfits turned out so good.
if i’d had more time i would have made the crazy toddler a skirt, but there are only so many times you can say, “mommy is almost done” before she’ll start to unleash the wrath of the toddler. it’s like when godzilla attacks a poor unsuspecting japanese village and everyone is running for their lives. the baby is a villager, but she can’t crawl away so she becomes a victim. it’s unreal the amount of anger that can live in a person so small and so cute. but, i warn you, do not be charmed by her adorably adorable looks. there is a fiery storm that brews in her and if you tell her the hated, yet most used word in her vocabulary, ‘no.’ you’d better duck and cover. we don’t get out much. for fear that we will never be allowed back.

but this sweet angel baby. 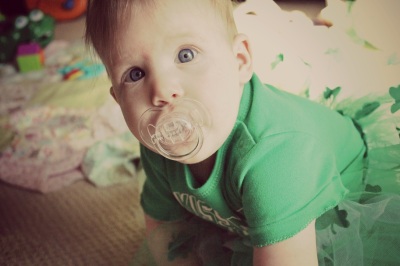 i’m smitten. i like her all the time. except for at 2 a.m. i still love her then, but like is a whole other ball game.

anyway. our day wasn’t very eventful, no parties or anything, but we did go to grandma and grandpas. the boy was up north with daddy. hiking, shooting guns, playing with cousins and dogs and getting dirty as every little boy should. making memories just the way i like. i did try to make a dress like i talked about, but let’s just say it didn’t work out too well. maybe another attempt this weekend, but we’ll see.