My big girls share a room. They’ve never not shared a room so it was natural for them to do so at the new house. I think it helped with the transition. It’s a smaller space and we had to add a closet so we can’t have them on opposite sides of the room from each other like we did in the last house. We have changed the layout of the room six times since moving here.

Six.
Neither of them does well by the window because the blinds are way too fun to play with. Hazel just wants to break them and Cora likes it because she can be nosy rosey and see who is coming and going from the house. But someone has to be by the window so Cora it is.
Up until yesterday Hazel’s bed was up against the end of Cora’s and the changing table, which is my old childhood dresser, was at the end of the crib. {Imagine an ‘L’ shape mirror image facing the door.} Unfortunately my third child has discovered that indeed those bars can’t hold her in forever and she can in fact escape. She would be the one to finally realize “you mean I can get out of this thing?” She is the bendiest child I’ve ever met. She stands at the edge, does the splits on one foot like in ice skating and gets her big toe on the top of the railing. Then crazy strong baby hulk strength kicks in and she pulls herself up with one arm and her big toe. Her big toe will be the death of me. She then climbs into her sisters bed and shenanigans ensue.
I know. Some of you might suggest just letting them share a bed could be the solution. This is not a good idea. Trust me I wish it was. I have dreams of them sharing a bed like Marianne and Elinor Dashwood talking about boys and life together till late in the night. However it is less like Jane Austin and a lot more like WWF fighting. Drama to the max. I know this because a few weeks ago when we had the crazy idea to take all the kids camping we had a laps in judgement and thought the girls could share the top bunk since we only brought one pack n play.
Never. Again.
One of two things happened. Pure giggles. Beautiful laughter of the best kind. The kind that makes you remember they are sweet and that you love them and don’t want to burry them in the sand. Or screams of terror. Hair pulling, biting, paci stealing chaos. Most of the time they bounced back and forth like a pendulum of emotions. I can see my future with these girls is going to be intense.
Thus our conundrum. Rather than move one of them to the babies room we thought putting the changing table between them made more sense. Until today. I walked in and caught her right in the act. In motion, one foot going onto Cora’s bed the rest of her cute body on the changing table. It was like catching an opossum walking on the wall at night. Scared the day lights out of me because if any child of mine will fall off the furniture and break something it’s going to be her.  Then my favorite part. She froze and acted like she was supposed to be sleeping there. “Oh! Hey mom. You forgot to put me in the bed so I’m just chilling here on the changing table pad.”
This child is amazing. 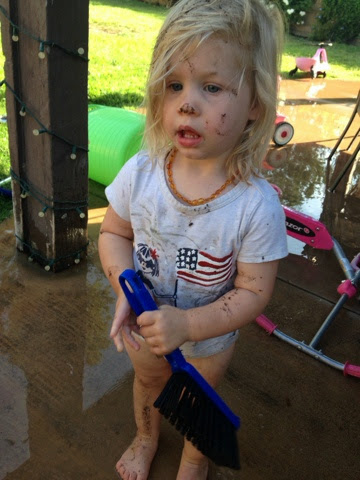 And crazy smart. And I love her in all of her insanity and qwerkiness. And not gonna lie, she is awesome.

Climbing out of the crib. Not so much.